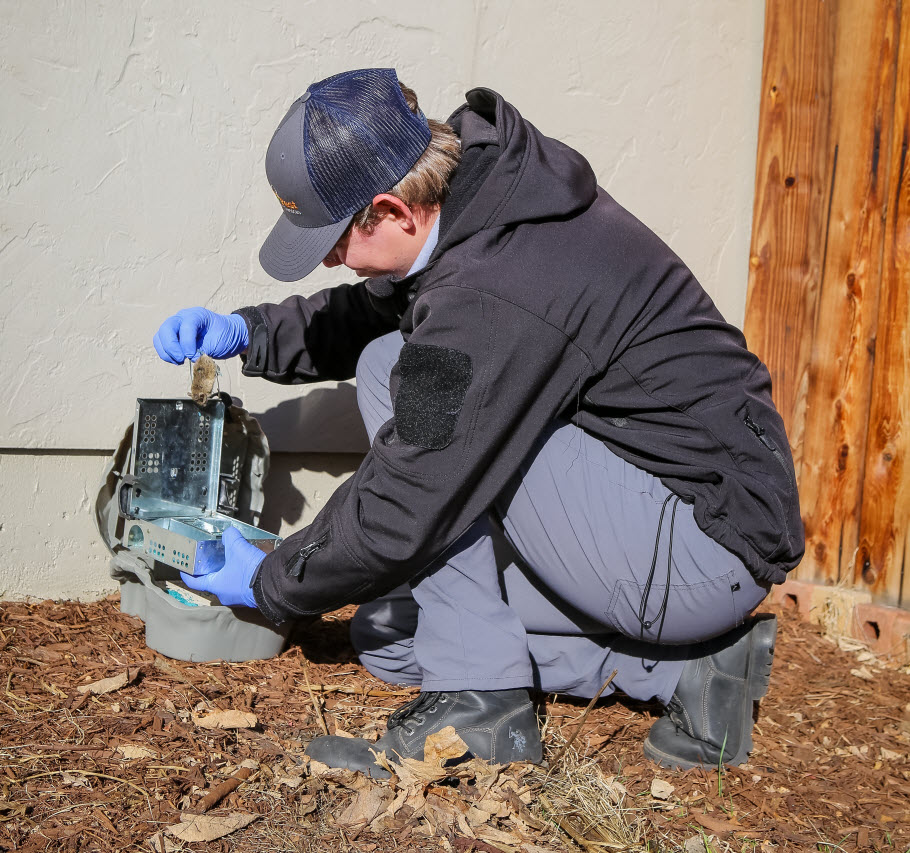 The house mouse has a small, slender body and is about ½ to 1 ounce in size. Their ears are larger in proportion to their body than other common rodents, and their tail is semi-naked. They are dark grey colored on most of their body and light grey on their stomachs, but there are many different possible color combinations.

– House mice (other than humans) are the most numerous and widespread mammals in the world. They are the #1 rodent pest in the world.
– These rodents can live virtually anywhere humans can and may live in severe conditions.
– Some mice will live outside in shrubbery and weeds eating weed seeds, insects, and any other food they can find.

– They prefer to feed on grains and seeds, but are capable of eating any human foods.
– Mice are very territorial, and where there are large infestations, there will be multiple nests each having their own “territory”. Each territory may range 10-30 feet around, above, and below the nest.
– The male mice are constantly jockeying for dominant positions and do so more vigorously when food is scarce. In extreme conditions, they can actually become cannibalistic.
– When finding a nesting spot, mice look for hidden places that are close to food and warmth. They rarely venture far from their nest after it has been established.
– They have been known to nest in building foundations, garages, storage sheds, and crawl spaces.
– Mice can spend their whole lives indoors.
– The average lifespan of a mouse is about one year. The male dominant ones can live up to two years.

House mice cause many problems. They need to nibble to keep their continuously growing front teeth short, so they nibble on walls, floors, ceilings, doors, utility pipes, and electrical wiring. They have been known to start fires, indoor flooding, explosions, equipment malfunctions, power shortages, and more. They can get into food bags and some hard plastics by nibbling right through them, contaminating the food and causing food poisoning. Mice also spread allergens and diseases. They aren’t as big of a threat as they once were in that regard because of today’s better hygiene practices and waste management solutions, but like cockroaches, they still travel into filthy areas like sewers and spread those germs around. Their urine also contains a protein that triggers serious rhinitis and asthma symptoms in susceptible people. When treating a mouse infestation, one must be mindful when emptying mice traps by making sure they are really dead before contact. They will bite if threatened or frightened and transfer harmful bacteria in the process.